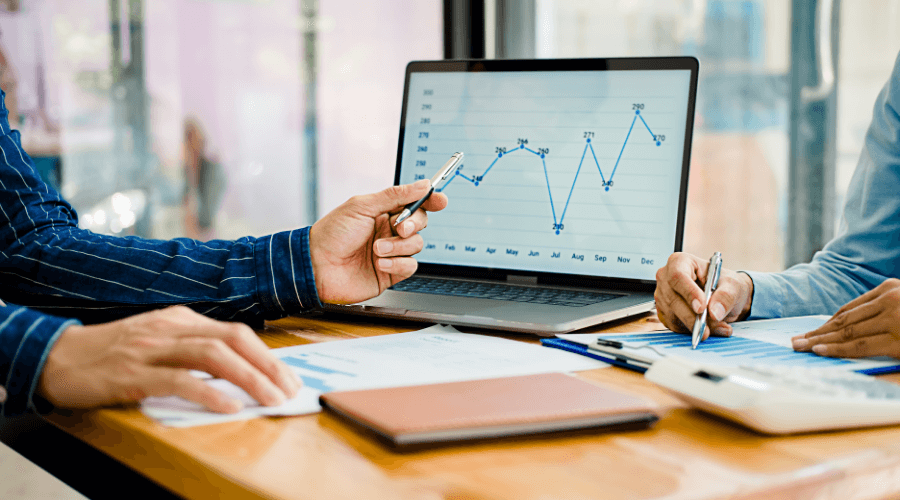 When an insurance policy is due for renewal, many financial advisors will recommend a fixed annual escalation rate of 10%, sometimes even 15%. Does this reflect reality? What if the original sum insured was incorrect to begin with?
Applying 10% escalation per annum will result in a compound increase of the sum insured by 61% over 5 years and 159% over 10 years. Of course, this is nowhere close to reality, as is demonstrated by the table and graph below.
Using the figures published by the Bureau for Economic Research (BER), we have compiled a trend analysis for building costs in metropolitan Gauteng over a 5-year period, spanning from December 2011 to December 2016 – with quite astonishing results:
Year-on-Year Comparison of Building Costs in Gauteng (December)
Dec 2011 – Dec 2012
Dec 2012 – Dec 2013
Dec 2013 – Dec 2014
Dec 2014 – Dec 2015
Dec 2015 – Dec 2016
+ 6.85%
+ 4.43%
+ 12.22%
+ 0.41%
+ 7.38%
It is important to note that there are fluctuations within each period and that a year-on-year comparison for June will produce entirely different figures – as can be seen in the graph below. Also, as suggested by BER statistics, the average relative building costs are approximately 10% higher in Durban and 15% higher in Cape Town than in Johannesburg.
Average Building Cost Escalation (Gauteng 2008 – 2016) 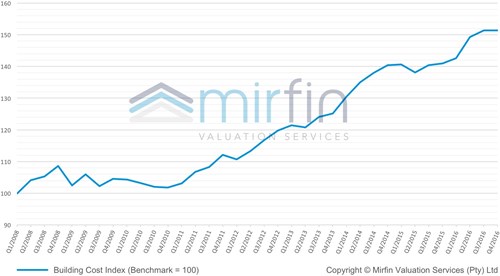 The essence drawn from this study is that the average escalation for Gauteng was a mere 34% from December 2006 to December 2011 and another 35% for the ensuing 5 years.
Does this imply that brokers should instead assume an annual escalation rate of 5% or 6% for policy renewal? The answer is no.
As is evident from the graph above, the annual variance can fluctuate widely within an insurance period therefore, it needs to be assessed regularly in order to ensure that the sum insured is on par with the future trend of building costs. The major drivers of this trend are supply and demand, manufacturing costs, competition within the construction market and the state of the national economy.
According to the BER, average building costs have increased by a mere 59.7% from November 2007 until today, whereas the majority of buildings policies have seen escalations of 159% during the same period by virtue of 10% fixed annual increases.
Currently in South Africa, the currency is weak and economic growth is stalled by political insecurity, extreme drought and labour market issues. This causes the local building industry to suffer from rising costs paired with low building confidence.
Can you foresee how this will affect the short-term development of building costs?
The cost of building typically comprises labour, materials, equipment, fuel and the contractor’s profit margin. The cost cycles of these components are rarely in sync with one another, as each of them are motivated by different input factors.
For example: One expects fuel price hikes, power outages and labour market turbulences to cause building costs to increase; however, this effect can be diminished in a climate of low building confidence where contractors are forced to reduce their profit margins.
For this reason, the historic analysis and short-term forecasting of building costs requires a scientific approach. Complex algorithms have been devised and perfected over the past half-century, enabling market analysts to make fairly accurate predictions based on input factors such as supply and demand, raw material prices, manufacturing costs and political and economic developments.
To warrant adequate insurance coverage for community schemes, the law requires that bodies corporate and homeowners’ associations obtain a professional valuation at least every three years. It is recommended that an amount of R1 000 – R3 000 is set aside to cover the cost of an annual valuation, depending on the size of the scheme.
It is important to note that a replacement cost valuation for insurance purposes should never be accepted from unqualified individuals or people with conflicting interests such as insurers, insurance brokers, financial advisors, real estate agents, building contractors or property developers. Instead, portfolio managers and trustees should only consult valuers who:
In view of the above, trustees have no excuses to neglect their fiduciary responsibility and gambling with their fellow homeowners’ life investments.

In order to proceed with using Mirfin's website, it is mandatory to accept cookies. You may withdraw your consent to cookies at any time by setting your preferences on your user profile.